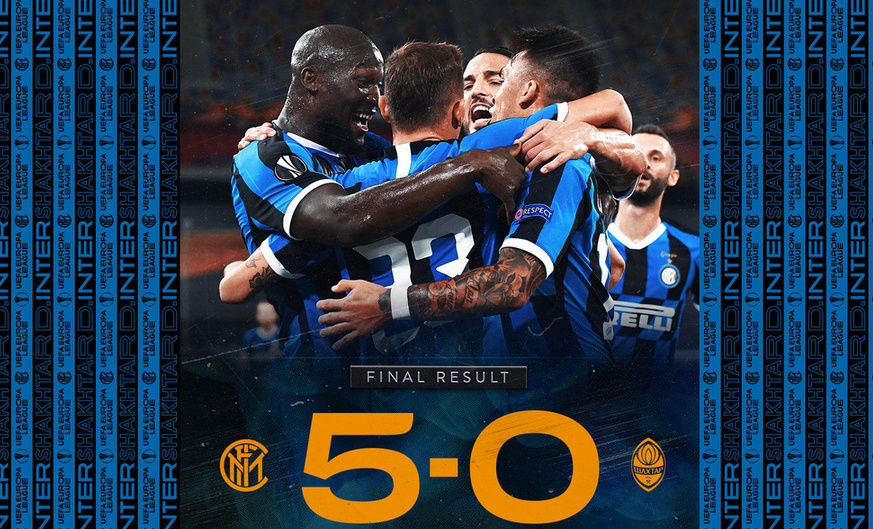 DÜSSELDORF - We absolutely do not want this summer to end. And it goes on, because on Friday, we have a date with Sevilla in Cologne. A date that just so happens to be the final of the Europa League. Our long season has one more game to go, and it’s the most important of them all. The most recent step, however, was the one that showed just what this great team is all about. They’re a brilliant group of players, they’re strong and have an affection for the shirt, down to every last drop of sweat.

It was a convincing 5-0 win over Shakhtar Donetsk. The result was absolutely deserved, correct and dazzling. Lautaro’s wonderful display (two goals and an assist), the inexhaustible Barella, D’Ambrosio’s usual performance, the strength of Lukaku. And all of the others. We’re in the final: Friday 21, we’re off to Cologne to play in the fifth UEFA Cup/Europa League final in the Club’s history. Only Sevilla stand in the way of European cup glory, but what an opponent they are - five-time (and record) winners of the competition. But it’s been ten years since Inter were last in a European final, and we know to give it our all.

En garde. It took the game a fair while to really get going and produce its first moment of excitement. The opening stages of the match were cagey as both sides looked to work each other out. Inter, who came into the game with the same eleven that beat Getafe and Bayer Leverkusen, played in their usual way and looked solid at the back from the off, truth be told they never really looked in trouble. Shakhtar, however, decided against their usual high press, allowing Handanovic and the Inter defenders time and space on the ball, which let the Nerazzurri back line dictate the game. This was largely in order to not allow Inter’s two forward to get into one-on-one situation with the defenders.

On the other hand, Inter pressed high and consistently forced the Ukrainian back line into making errors. Barella, who was extremely active in this regard, latched onto wayward passes from the goalkeeper Pyatov. And this very thing produced the opening goal of the game: Barella gathered a poor kick-out from Pyatov and put in an inch-perfect cross for Lautaro. El Toro rose highest and nodded home to make it 1-0.

The goal enabled Inter to dictate the pace of the game and pick their moments to attack. Barella was a particular inspiration in midfield, breaking up Shakhtar’s play and putting the Nerazzurri on the front foot. Both D’Ambrosio, cutting in from the left, and Barella himself, with a right-footed shot, had chances to double Inter’s lead. However, Shakhtar grew into the game as the first half wore on; without really threatening, the Ukrainians had lots of possession. Yet the speed and skill of the many Brazilians at their disposal was not enough to create any meaningful chances. Only Marcos Antonio, with a decent effort from outside the box, caused Inter any scares in the first half.

Inter were the side doing the attacking after the break too. Lautaro was a man unleashed and almost scored with a magnificent lob, only for Pyatov to get hands to it. Conte’s team continued to play as Castro’s side faltered. The only real scare for the Nerazzurri came on the 63-minute mark, with Junior Moraes’s close-range header being kept out by Handanovic. But this was the last sign of life from Shakhtar, who were then put to the sword by a rampant Inter.

D’Ambrosio, inspired by Conte’s encouragement from the touchline, was the man who doubled the Nerazzurri’s lead, nodding home Brozovic’s corner to score his fifth of the season. It was a goal that shattered the Ukrainian team’s morale, with Inter’s forwards then taking centre stage. Lautaro, a real livewire thoughout, made it 3-0: with Inter having once again won the ball back in the opposition half of the pitch, the Argentine stroked the ball into the bottom corner to all but put the game to bed.

However, it wasn’t over, because Inter continued to push forward, not taking any pity on their opponents. The only thing that was missing was a Lukaku goal, and this duly arrived thanks to wonderful work from Lautaro, who dribbled away from two players and set the Belgian striker up to score with 78 minutes on the clock. But Big Rom wasn’t done: he took centre stage once more as he went it alone, dribbling beyond the Ukrainian backline and firing into the net with his right foot to seal a historic 5-0 win.

A magnificent victory that sends us to Cologne. On Friday, we’ll be involved in the fifth UEFA Cup/Europa League final in our history. Come on!

Next
Inter fall short in the final, the Europa League goes to Sevilla