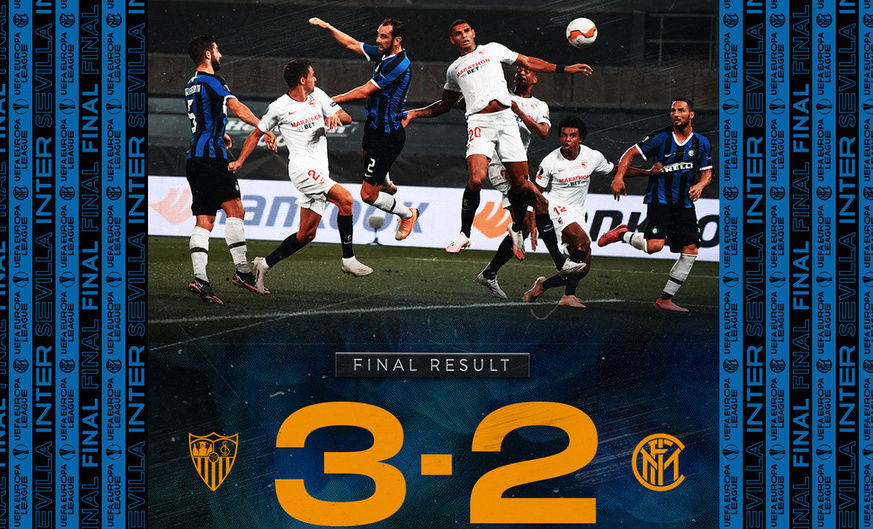 INTER FALL SHORT IN THE FINAL, THE EUROPA LEAGUE GOES TO SEVILLA

Inter fall short in the final, the Europa League goes to Sevilla

COLOGNE - Losing like this hurts. It’s painful. Tonight, the Nerazzurri’s wonderful run throughout this strange summer of football came to an end. It ended with Sevilla lifting the trophy for the sixth time in their history. It ended with Antonio Conte’s boys sprawled out on the pitch at the Stadion Köln, struggling to digest the result they’ve just suffered. While this pain will no doubt last, it will certainly serve as a lesson for the future. This has to be something to build from in the future.

Tonight’s 3-2 loss for Inter saw their Spanish opposition win their sixth UEFA Cup/Europa League in history, from six finals played. A bitter pill to swallow for the Nerazzurri, who took the lead after just two minutes through Lukaku, who conceded three unique goals, two headers and one deflection, with the ball coming off our Belgian striker to go into the net for the third. And despite our efforts right until the final whistle, the Nerazzurri leaving all of their heart and strength out on the pitch, it just wasn’t enough to overcome the Spanish side.

Looking back at past European finals, it’s not easy to find a first half where four goals were scored and both sides took the lead before being pegged back, especially one where two were netted in the first twelve minutes. Sevilla vs. Inter was, however, the exception in what has been a unique Europa League campaign. While Conte went with the same starting eleven for the fourth consecutive game, Lopetegui made one change, with de Jong being sent out to play from the beginning. It turned out to be an inspired choice.

Nevertheless, the Nerazzurri took charge early on. A few minutes had been played when Lukaku stepped up and fired past Bounou to make it 1-0 from the penalty spot. The Belgian striker had won the spot-kick himself after latching onto Barella’s through ball and being brought down by Diego Carlos in the box. In converting the penalty, he scored his 34th goal of the season, equalling Ronaldo’s debut-season goalscoring return in Nerazzurri colours in the process.

Despite taking the lead, Inter then struggled to put together promising moves. Making life harder was the fact that the Nerazzurri were up against an experienced side who were cleverly going about their business. The Spaniards grabbed an equaliser with twelve minutes on the clock: Navas whipped it in and de Jong beat Godin to the ball to find the net with a diving header.  It was a goal that brought more tension to the game. After all, the stakes were high. Conte’s men looked to respond, aiming to pick out Lukaku up front. D’Ambrosio, meanwhile, was making menacing runs forward in the hope that he’d be found by his teammates at the back post.

Yet it was a strange and unpredictable game in Cologne, in which headers were king. In the 33rd minute, it was de Jong on the end of it: the Dutchman rose highest and headed home. Sevilla’s second was unexpected and painful for Inter, but a spectacular effort. Though Inter got themselves level in an instant: Brozovic took the free kick and Godin headed in to make it 2-2. The Uruguayan’s goal was liberating and providential. The veteran is well-accustomed to making an impact on the biggest of occasions and is now the sixth player in history to score in a Champions League final (with Atlético Madrid) and in a Europa League final.

With the match locked at 2-2, proceedings returned to a more familiar pattern for a final: tense, cautious and with few chances. Gagliardini had a splendid chance in the 52nd minute, but Diego Carlos made a brilliant block. The Sevilla defender was at the heart of everything in the game: the foul on Lukaku in the box, this block and then the winner in the 74th minute. The goal that condemned us, that finished us, that saw us lose the final came from a bicycle kick, which was deflected into Handanovic’s net by Lukaku.

As previously stated, the final was completely done at that point: Sevilla stopped playing and instead tried only to restrict the Nerazzurri. The chance in the 81st minute for Moses and then Sanchez, which was cleared off the line by Koundé, was really the last act in a match that finished nervously and slowly.

Bitter, disappointing, but not necessarily unfair. The efforts of a summer, in which Inter gave everything, have not been rewarded as we feel they maybe should have been. But we are Inter and we are a team. We’ll know how to go again, we know how passionate these boys are and we know the affection that Inter fans around the world have for their Club. We are Inter.