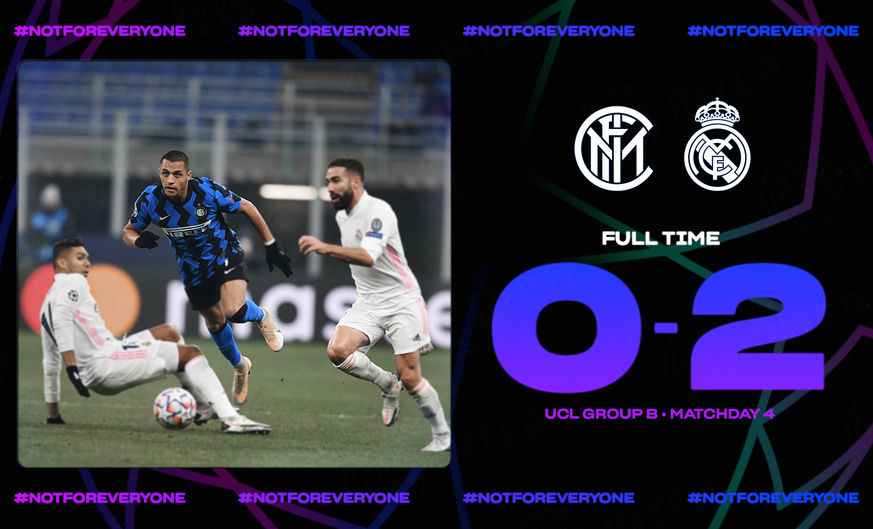 MILAN – With the news that Diego Armando Maradona had passed away in the afternoon, it was never going to be a joyful evening. The loss of an inimitable footballing genius has shaken the football world, filling it with sadness. The stage to honour the great Argentine champion was a cold and silent San Siro, the setting of Inter vs. Real Madrid, a vital game on the Nerazzurri’s European journey. 22 years ago today, a goal from Zamorano and a Baggio brace secured a win for the Nerazzurri against the then European champions. Tonight, history didn’t repeat itself. Quite the contrary in fact. This evening’s match was a difficult and painful one: Real comfortably ran out 2-0 winners to place Inter’s hopes of qualifying for the last 16 in jeopardy.

It was an uphill battle from the very start: with just five minutes on the clock, the away team were awarded a penalty for a foul by Barella on Nacho in the box. Hazard stepped up to score the spot-kick, and Inter had begun in the worst way imaginable. It was a goal which brought a sense of calm to Zidane’s side. With Real having taken to the pitch in a 4-2-3-1 formation, Ødegaard, who lined up in front of the deep-lying midfielders Modric and Kroos, was looking assured, while Hazard and Vazquez were proving to be a real threat to the Nerazzurri defence.

Inter didn’t have any answers, with the Spaniards producing an almost faultless display in the opening half an hour. In the 13th minute, Vazquez hit the post with a right-footed snapshot, while Mendy inexplicably chose to roll the ball across the box when through on goal four minutes later. Inter were struggling to make any sort of inroads into the Real Madrid half, with Zidane’s side passing the ball around with quality and confidence and not giving anything away. Courtois was a spectator, Inter were on the rocks.

And then there was a decisive blow on the 33-minute mark: Vidal went down in the area following a coming together with Varane. Frustrated that the referee hadn’t awarded a penalty, the Chilean protested to such an extent that the match official brandished two yellow cards. Inter were down to ten men.

After the restart, Conte tried to shake things up, bringing on D’Ambrosio and Perisic for Bastoni and Lautaro. Inter switched to a 4-4-1 formation and initially did well for the first 15 minutes of the second half, playing with purpose and pride. But just when there looked to be something in it for the Nerazzurri, Real struck again: Zidane brought on Rodrygo and, 32 seconds later, the Brazilian finished off Vazquez’s assist via a deflection off Hakimi to make it 2-0 (it's been registered as an own goal by UEFA).

With half an hour to go, and with the Nerazzurri two goals and a man down, the game was all but over. To their credit, Inter didn’t collapse, but a miracle wasn’t forthcoming. Hazard came close to making it 3-0, while Perisic fired narrowly off target and then forced Courtois into a fine stop with 82 minutes on the clock.

With Borussia M. managing to overcome Shakhtar once again, tonight’s 2-0 defeat could prove costly. The Germans now sit on eight points at the top of Group B, with Real Madrid following closely behind on seven. Shakhtar have four, two more than Inter, who have picked up two points from four games. Mathematically, it’s still possible for the Nerazzurri to qualify, but there will have to be a very favourable set of results for them to do so. Next
Inter come from behind to beat Torino 4-2