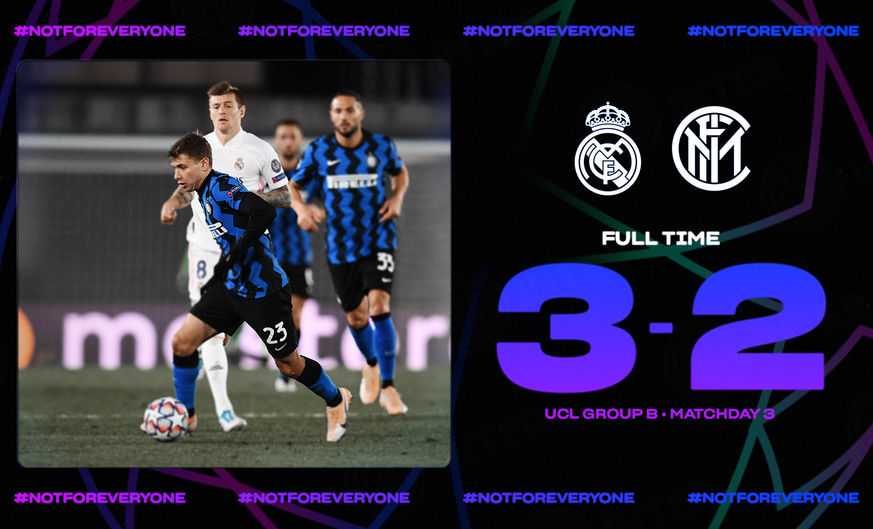 INTER FIGHT, BUT IT'S NOT ENOUGH: REAL MADRID WIN 3-2

CHAMPIONS LEAGUE | Nerazzurri come back from two down, but Rodrygo grabs a late winner

MADRID - Now, it’s a bit more difficult. Nothing is certain but reaching the next round will be complicated. Inter slumped to a 3-2 defeat in Madrid and now slip to the bottom of Group B on two points, behind Borussia Mönchengladbach (5), Shakhtar and Real (4). Nothing is decided because Inter, once again, showed that they were certainly no worse than an opponent as strong as Real. Inter went behind, got level and went behind again in a game that ended 3-2, which was 2-0, then 2-2 and could then have even been won by Inter. The comeback was brilliant, as Lautaro and Perisic cancelled out goals from Benzema and Ramos. Then, in the 80th minute, came the killing blow from the substitute Rodrygo. It’s a tough one to take, perhaps even undeserved, but Inter leave empty-handed. There’s bound to be a great deal of regret for errors committed, which gifted goals to our opposition, and in the knowledge that Inter can compete with any side.

We weren’t playing in the feared Bernabeu, but playing Real Madrid is never a normal fixture. The pressure over playing against Los Blancos at the Estadio Alfredo di Stéfano in Valdebebas was further compounded by Gladbach’s huge six-goal win over Shakhtar and the German side claiming top spot in the group for the moment. Winning was thus an obligation for both sides and the game reflected this fact. It was a frantic start as an aggressive Real side came flying out of the traps. Real’s high press caused problems for Inter early on; Asensio forced a brilliant save out of Handanovic (4’).

However, the Nerazzurri - just as Conte had explained ahead of the match - would not be fearful and tried to play their own football, with long searching balls out to Hakimi on the right or looking to pick out Lautaro and Perisic on the move. In the space of one minute (9’-10’), Inter had two great chances. First, Perisic’s cross found Barella, but the Italian’s header hit the crossbar. Then, Lautaro let fly from outside the box but Courtois reacted well to get a strong hand to it. Lautaro’s movement was Inter’s greatest weapon on the night; El Toro drifted out to the left and set up Vidal, whose shot was not far wide.

Inter were able to control the tempo but Real had experience and Benzema was able to direct their attacks with his movement and hold-up play. It was the French striker who opened the scoring after pouncing on a Hakimi backpass and it was straightforward for the Real Madrid no.9 to round Handanovic and slot home. Things got harder still eight minutes later with a typical Sergio Ramos effort as headed home his 100th Real Madrid goal from a corner.

Inter needed to respond immediately to stay in it and did so. Lautaro found the net with a great right-foot strike under pressure from Varane after being played in by a magnificent backheeled volley from Barella. Inter knew that they had the weapons to hurt Madrid who weren’t impenetrable at the back. If the second half began at a lower tempo compared to the first, the match truly exploded into life 20 minutes in. Vazquez missed a chance to make it 3-1 and the Nerazzurri forwards made him pay straight after. In the 68th minute, Inter drew level through Perisic who did well to fire in a left-foot shot after Lautaro nodded the ball through to him. The pair came to life for the next ten minutes, creating a further two good chances. The Argentine narrowly missed the top corner with a right-foot effort before Perisic failed to hit the target with his left on the break. Just as it seemed Inter had the momentum to go on and win, the hosts responded with a body blow. The Nerazzurri gave too much space up on the left and the ball made its way to Rodrigo in the middle who fired beyond Handanovic. The side couldn’t make it back from 3-2 as tiredness started to set in. Conte’s changes brought some energy but it wasn’t enough. In the final minutes, Real Madrid missed a clear chance to make it 4-2 through Benzema. The final whistle culminated in defeat and a tricky road to qualification. Next
A hugely disappointing evening for Inter: Real Madrid win 2-0 at San Siro