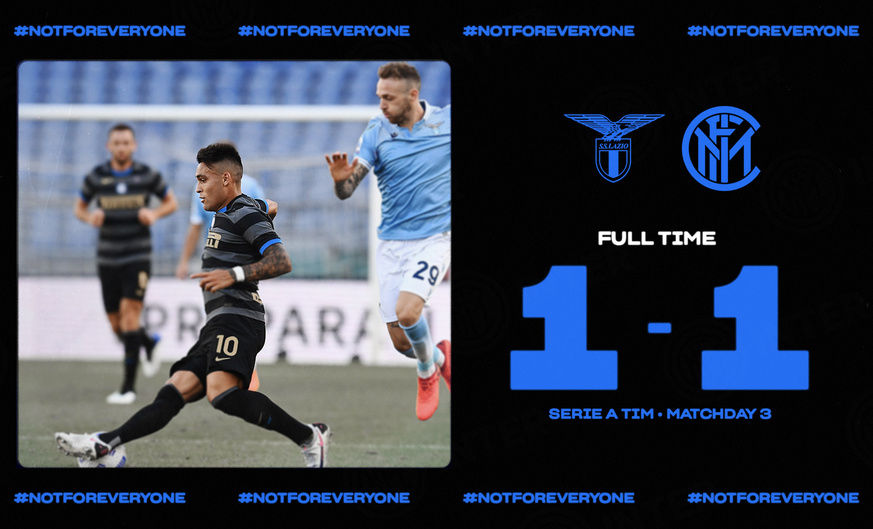 ROME – Equal in every respect: goals, points and red cards. In a strange game at the Stadio Olimpico, Inter were forced to settle for a 1-1 draw against Lazio, with the Nerazzurri left to regret not being able to kill off the match at the start of the second half. Instead, the hosts reacted vehemently, drawing level, coming close to a second and managing to hold Conte’s men at bay after being reduced to ten men. Then, in a rather chaotic finale, Inter also had a man sent off.

It was a slow start to the game, with both teams looking to figure one another out and remaining particularly attentive. Most of the danger being posed by Inzaghi’s side was coming down the right, with Lazzari looking to provide a spark down the right, a flank where the most important moments of the match would take place later on.

The first burst of life came from Luis Alberto, which would prove to be just one of many duels with Handanovic throughout the match. The Spaniard’s shot was saved and turned behind for a corner in the 19th minute by the Nerazzuri captain. Inter were struggling to create chances during this stage of the game but were imposing themselves well, being very rarely caught off-guard. Then Lautaro took centre stage, a source of energy that put Inter ahead. Following good work by Perisic, the Argentine pounced on the ball and showed great technique to fire in the net. Inter were now looking more assured in their play, with Perisic and Hakimi heavily involved as the Nerazzurri came forward. Lazio, meanwhile, had to make three substitutions owing to injuries within the first 45 minutes of play: Marusic, Radu and then Baros (who himself had come on for the Romanian).

The start of the second half could have seen Inter pull away from Lazio: Lautaro and Lukaku had two wonderful opportunities but were unable to find the net. Lazio thus remained in it and, during their most difficult period of the match, found an equaliser through by Milinkovic-Savic, who rose to meet Acerbi’s cross and head the ball past Handanovic. It was an unexpected blow that stunned the Nerazzurri (who wore their Third Kit for the first time during the match) and gave Inzaghi’s team life again. Luis Alberto posed a constant threat to Handanovic (who was also grateful for a crucial Bastoni intervention).

With the match starting to enter its closing stages, tensions began to fray, with Immobile seeing red for lashing out at Vidal. A man up, Inter were unable to take advantage of their numerical superiority, although they were missing that bit of luck too: with the Nerazzurri throwing men forward, Brozovic’s deflected effort agonisingly hit the post. Just seconds later, after a coming together with Patric, Sensi was also given his marching orders.

With both teams down to ten, Conte’s men went in search of a winner. Ultimately, however, they were forced to settle for a 1-1 draw. It’s now time for the international break, after which we'll face Milan in the Derby.

Next
Woodwork and regrets: Inter play out a goalless stalemate against Shakhtar