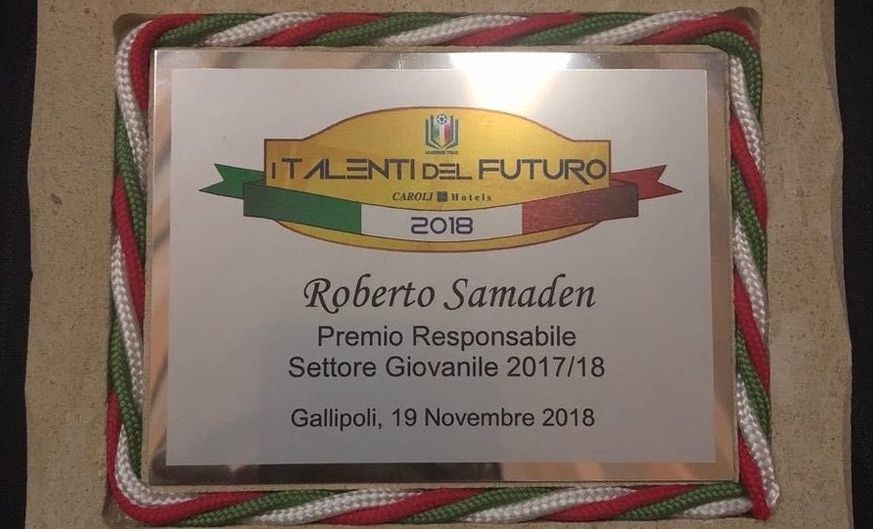 GALLIPOLI – At the Cine Teatro Italia in Gallipoli, the Oscar del Calcio Giovanile (Youth Football Awards Ceremony) was held. The Head of Inter’s Elite Academy, Roberto Samaden, was given an award, as were Paolo Annoni and Gabriele Bonacina, the respective coaches of Inter’s Under-15 and Under-16 sides.

Inter were given the miglior Settore Giovanile 2017-2018 (the best Youth Academy) award, with Roberto Samaden picking up this accolade in his capacity as the Head of the Elite Academy. This was given to Inter as a result of the three Scudetti titles won by the Nerazzurri’s Primavera, Under-16 and Under-15 sides. Paolo Annoni and Gabriele Bonacina were given the awards of best U-15 coach and best U-16 coach respectively.

Stefano Vecchi, Davide Bettella and Nicoló Zaniolo were also honoured for their work, the trio having contributed to Inter’s Primavera side becoming Italian champions last year. Andrea Pinamonti (currently on loan at Frosinone) was given the award of the best striker born in 1999.

Roberto Samaden had this to say while on the stage: "This award recognises all the people who work daily in our Elite Academy. Our coaches are asked to develop and shape our young players through their daily work, both on and off the pitch. It’s often the case that working in this way results in victories. And in recent years we have managed to be particularly successful."

This ceremony was launched for the first time in 2012 in Santa Maria di Leuca (it has since taken place in Milan and Rome and at Coverciano) and aims to give recognition to young talented players – both male and female – born between 1998 and 2001.