Federico Dimarco was born in Milan on 10 November 1997. The left-back spent his entire youth career at Inter, first donning the Nerazzurri shirt when he was just seven years old, and has developed a powerful shot and a great aptitude for crossing.  He won the Viareggio Cup in 2015 and the Coppa Italia Primavera in 2016 during his time with the Inter youth teams.

He made his Inter debut on 11 December 2014 in a Europa League fixture when he was just seventeen years old. His first loan took him to Ascoli, before he went on to gain further experience at Empoli, Sion and Parma. He returned to Inter in 2019.

Dimarco has represented Italy at all levels of youth football, from the Under-15s to the Under-21s, with whom he has made 11 appearances in total and has scored one goal. He helped his sides earn second place finishes at the 2013 and 2016 European Championships while he was with the U17s and the U19s respectively, and was a part of the Azzurrini team that came third at the U20 World Cup in 2017. 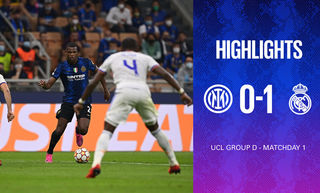