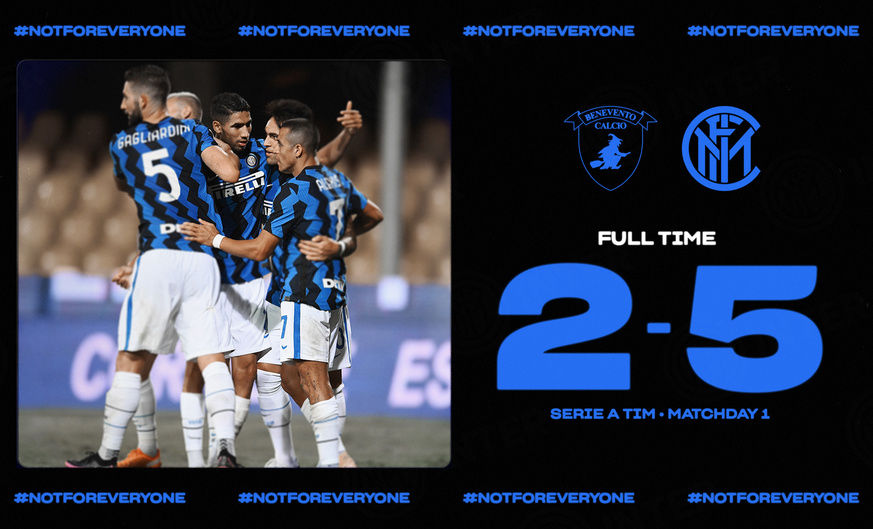 FIVE GOALS AND ANOTHER THREE POINTS: INTER WIN IN BENEVENTO

A 5-2 goal fest at the Stadio Ciro Vigorito with Lukaku, Gagliardini, Hakimi and Lautaro all on the scoresheet

BENEVENTO - Seven more goals, three more points. Goals and emotions certainly haven’t been lacking in the Nerazzurri’s start to the season, who recorded five goals, two crossbars and plenty more chances this evening. It wasn’t all plain sailing, with two goals conceded and a few too many chances gifted to the home side, but if anything that shows that Inter had to go out and earn this 5-2 win. Inzaghi’s side never gave up, constantly pressing the Nerazzurri on the ball and certainly making Conte’s boys fight for the points at stake.

Inter come away from the Stadio Ciro Vigorito with all three points and a record for goals scored in their first two games of a Serie A season, the Nerazzurri now on nine after their four against Fiorentina and five tonight. A Lukaku brace, goals from Gagliardini and Lautaro, and more than anything, a first Nerazzurri finish for Achraf Akimi, a star performer tonight as he also grabbed the assist for the first goal.

While the win against Fiorentina in our first game of the season began with a goal conceded, Inter reversed this trend completely tonight. Just 28 seconds of play had passed since Piccinini’s opening whistle when Lukaku tucked the ball into the net to make it 1-0. 28 seconds where Benevento didn’t even touch the ball, as Kolarov fired a long ball across to Hakimi, our Moroccan played a one-two with Sanchez and then rolled it in for Lukaku. Simple, stunning, sensational. That was how Inter kicked things off at the Stadio Ciro Vigorito, with seven changes to last week’s starting eleven and much more clinicality than before.

Lukaku’s goal was rapid, Inter’s fastest in Serie A since the 2004/05 season. But the goal certainly didn’t kill off Benevento, and only served to complicate Filippo Inzaghi’s gameplan. The home side deserved plenty of credit, really going for Inter as the Nerazzurri tried to play out the back. Benevento’s press looked impressive for the opening stages, and even if they weren’t creating themselves, they were certainly making life hard for Inter.

However, the wings and switches of play provided a way around this press, and also a way through the heart of the home side’s defence. That was how our second arrived: Hakimi received it on the switch, knocked it in to Young, who controlled brilliantly before setting it to Gagliardini. Our man in the middle then thundered it home with his left in similar fashion to his goal at home to Genoa last season.

Inter then went on the hunt for more, and a third duly arrived just before the half-hour mark, with Lukaku finishing off Gagliardini’s assist following Montipò’s mistake at the back. However, this didn’t signal the end for Benevento, who managed to pull one back just a few minutes later. In much the same way as his opposite number had done before him, Handanovic gave the ball away and Caprari was able to expertly find the net from the edge of the box. No longer in such a commanding position, Inter, spurred on by the excellent Vidal, once again looked to the flanks, where they’d been enjoying a lot of success. And this is how the Nerazzurri’s fourth goal of the game arrived, with Achraf Hakimi bagging his first Inter goal after Ashley Young’s cross had caused havoc in the box.

Inter didn’t feel the need to force things after the restart, and the tempo dropped slightly as a result. Benevento, meanwhile, weren’t about to give up and continued to cause problems when given space. At the start of the half, Moncini hit the post with his right foot, while Handanovic was forced into a fine stop to deny Letizia with 64 minutes on the clock. The changes made by Antonio Conte helped Inter raise their game once more, with Barella, Brozovic, Perisic and Lautaro providing fresh legs out on the pitch. After Gagliardini had struck the bar with a fierce half-volley, El Toro managed to get on the scoresheet. After being picked out by Sanchez, the Argentine beautifully planted the ball into the corner of the net from just outside the box in much the same way as he did against Fiorentina. Inter were in devastating goalscoring form, but Conte’s men were caught napping once more at the other end as Caprari bagged his second of the match in the 76th minute. In the closing stages, Perisic (a sitter), Sanchez (twice), Lapadula (a great save from Handanovic) and Eriksen (unfortunate to see his wonderful long-range effort come off the bar) all could have scored.

Three points, five goals and another away trip to prepare for: at 15:00 CEST on Sunday, Lazio vs. Inter will be played.

Keep this up, lads.